The project will pump and deliver 50 million litres of potable water from
Lake Malawi to Lilongwe City every day, putting a complete halt to problems that have affected the lifestyle and livelihoods of the city’s two million residents.

Valued at about $500 million, it is billed as Africa’s largest water transfer project under construction and is expected to be completed by 2018/2019.

The primary design and construction components that will be included in the potable water supply system will comprise of:
____
The Lake Malawi Water supply Project was first conceptualized as a long-term and sustainable intervention to water problems that have been affecting the ever growing population of Lilongwe for over a decade now. Lilongwe, which is Malawi’s largest City, has a population fast approaching the 2 million, a situation that will require a stable water supply. The local Water utility company, Lilongwe Water Board (LWB), has currently been forced to ration water supply to residences and public places on a continuous basis.

The consortium is considering scaling up the abstraction rate from 50 million to 100 million litres a day. Khato Civils will also build clear water tanks and pumping stations along the 125 km stretch, the first one at Lifuwu in Salima with a capacity of 2500 cubic metres.

The treated water will then be conveyed from Lifuwu to Kanyenyeva, which is located 51 kilometres in the same district. At Kanyenyeva the water will be pumped to Dowa turnoff clear water tank, a distance of 21 km. From there the water will gravitate 37 km to Kanengo water tanks. It is from this stage that water will now be distributed through the existing Lilongwe Water Board’s systems to the city’s residents.

The residents in Salima and Dowa will also equally benefit from access to potable water as they fall within the stretch of the project’s catchment area.

From another perspective the project will create in excess of 400 jobs and a lot more spin-off opportunities for small and medium enterprises.

The Khato Civils (Pty) & South Zambezi (Pty) Limited joint venture, was awarded the contract after the Office of the Director of Public Procurement (ODPP), used the restricted tendering procurement method under International Competitive Bidding. The consortium came ahead of six other reputable global companies from China, Portugal, South Africa, Italy and United Kingdom. 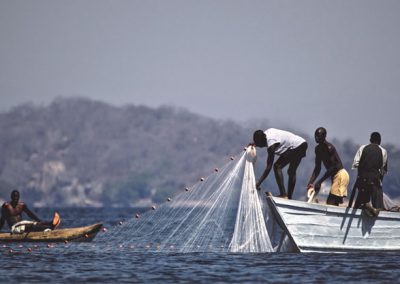