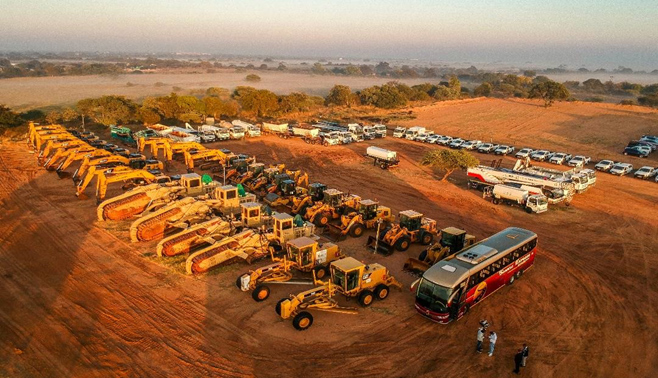 Well equipped Khato Civils uses innovation to work faster and smarted like it did on the project in Botswana. Photo: Supplied/ Khato Civils
After abandoning a R3.5 billion water project in Giyani in Limpopo due to non-payment for work done, Khato Civils has resurfaced in Botswana and earned plaudits for completing a P900 million (R1.169 billion) water pipeline in record time and at less than half the cost despite the spread of Covid-19.
Johannesburg-based Khato Civils completed the 100km pipeline last month, which will provide water to Botswana’s capital Gaborone and 23 villages.
The Botswana Water Utilities Corporation praised the company for completing the project, which would ordinarily take two years, in 12 months, saving the water utility P1.2 billion (about R1.6 billion).
Ntshambiwa Moathodi, the technical director of Water Utilities, said that similar projects in Botswana would ordinarily take two years to complete for not less than P2 billion.
“You will see in the next two years, we will be delivering similar projects just as cost-effectively. There is no doubt we can bring down the cost of mega water projects,” Moathodi said.
Simbi Phiri, Khato Civils’ chairperson, said the fact that the project was awarded as a turnkey, many engineering variations were avoided and if they were necessary, they did not cost the Botswana government anything.
“We designed the project ourselves, so for any variations, we did not charge government more,” Phiri said.
We created employment both in Botswana and South Africa during the Covid-19 pandemic, and we injected about R300 million in the South African economy.
Simbi Phiri, Khato Civils’ chairperson
Phiri said Khato Civils’ ownership and use of modern machines enabled the company to work at speed and complete projects quicker. He said the company used trenchers to dig the 100km, which were much faster than excavators as they covered 3km a day.
“We had no problems with payments. We were invoicing about R100 million a month and the Water Utilities Corporation paid because their engineers were on the ground and saw the work that was going on,” he said.
“When the client pays, construction becomes very easy. If invoices take three months to be paid, how can you work? The last invoice in Giyani was not paid for nine months and we decided to leave the site,” Phiri said.

The Giyani controversy
Khato Civils abandoned the Giyani project in 2019 when the department of water and sanitation and the Lepelle Northern Water Board failed to pay the company R50 million for work completed. 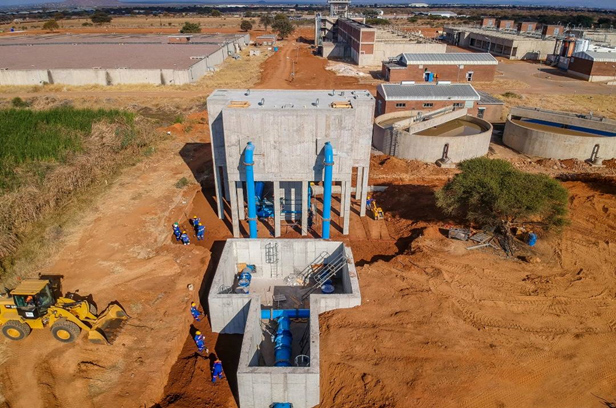 Khato Civils abandoned a water project in Giyani, Limpopo because of none payment but has earned a lot of praise in Botswana for completing a multimillion rand project in record time. Photo: Supplied/Khato Civils
The project was to provide clean running water to 55 villages in the Mopani District Municipality.
The controversy around the Giyani project is now being probed by the Special Investigating Unit (SIU), which is moving to recover R4.1 billion.
Kaizer Kganyago, the SIU spokesperson, said a civil claim had been instituted in the Polokwane High Court against LTE Consulting, Khato and Lepelle Northern Water Board. LTE subcontracted Khato for the construction of the project.
On the other hand, Khato Civils has approached the courts to be paid what is due to them. Overall, the company is demanding more than R300 million for work done, closing down the site and its retention fee.
After Giyani, Khato Civils finished several projects in South Africa, including the M1 Double Decker Bridge rehabilitation and upgrades in Johannesburg worth R170.5 million, the R493.2 million Saldanha Bay new bulk electrical supply infrastructure and the construction of outfall sewer pipelines in Polokwane valued at R81.3 million.
“We were paid on time for these projects and there was no problem finishing them,” Phiri said.

Economic boost for SA
Phiri said that Khato Civils sourced steel and other materials for the Botswana project from South Africa, and the pipes were manufactured in the country.
“We created employment both in Botswana and South Africa during the Covid-19 pandemic, and we injected about R300 million in the South African economy,” he said.
Satisfied with the company’s work, the Botswana government recently awarded Khato Civils a P800 million project to construct a water treatment plant.
Khato was also awarded a R3.5 billion bulk water supply project in Malawi, a pipeline to ferry water from Lake Malawi to Lilongwe and surrounding areas.
“We’re bringing the economy from other countries into South Africa. There are always innuendos about how we get such big contracts because most people do not believe that a black-owned company like us can do such jobs,” Phiri said.
“After the controversy in Giyani, we built our headquarters in Johannesburg to show that we are serious about investing in the country. Gauteng Premier David Makhura and former Tshwane mayor Solly Msimanga were there when we opened the building,” he added.